The Royal Marine Conservation Society of Jordan (JREDS) was founded in 1993 by a group of concerned Jordanian ecological divers, led by Her Royal Highness Princess Basma Bint Ali, one of the first female divers in Jordan. In 1995, the initiative became the first specialized Jordanian non-profit, non-governmental organization dedicated to the conservation of the marine environment in Jordan. Jordan’s 27 km coastline at the Gulf of Aqaba is the country’s only sea-outlet, a very attractive tourist destination at the Red Sea, and home to one of the best snorkeling and diving coastlines in the world. Yet, the fragile underwater ecosystems are permanently threatened by economic activities, environmental pollution, and climate change.

Recently, JREDS has released the first field guide on Jordan’s hard corals, which provides a comprehensive review and details on numerous hard coral species at the Gulf of Aqaba. The 432-page field guide lists all registered hard corals species and provides notes on their taxonomy, distribution, ecology and phenology, while providing high quality photos for each species recorded.

This guide was compiled after an extensive field survey along the coastline of the Gulf of Aqaba at depths from zero level down to 30 meters below sea level. Under enormous efforts, the comprehensive survey has targeted all potential habitats, including natural and artificial reefs, soft substrates and reef caves, in order to obtain all the necessary details.

The results of the survey revealed with clear evidence the importance of the Gulf of Aqaba as a host of unique and invaluable marine ecosystems, as 157 species of hard corals were identified, including 153 scleractinian corals [Anthozoa, Scleractinia], one organ pipe coral [Anthozoa, Alcyonacea] and 3 fire corals [Hydrozoa, Milleporidae]. In addition, 11 endemic species have been recorded in the Gulf of Aqaba, representing 65 per cent of the 23 known endemic coral species in the Red Sea. Some of the reported species represent their first record in the northern Red Sea, which is of high value for Jordan. 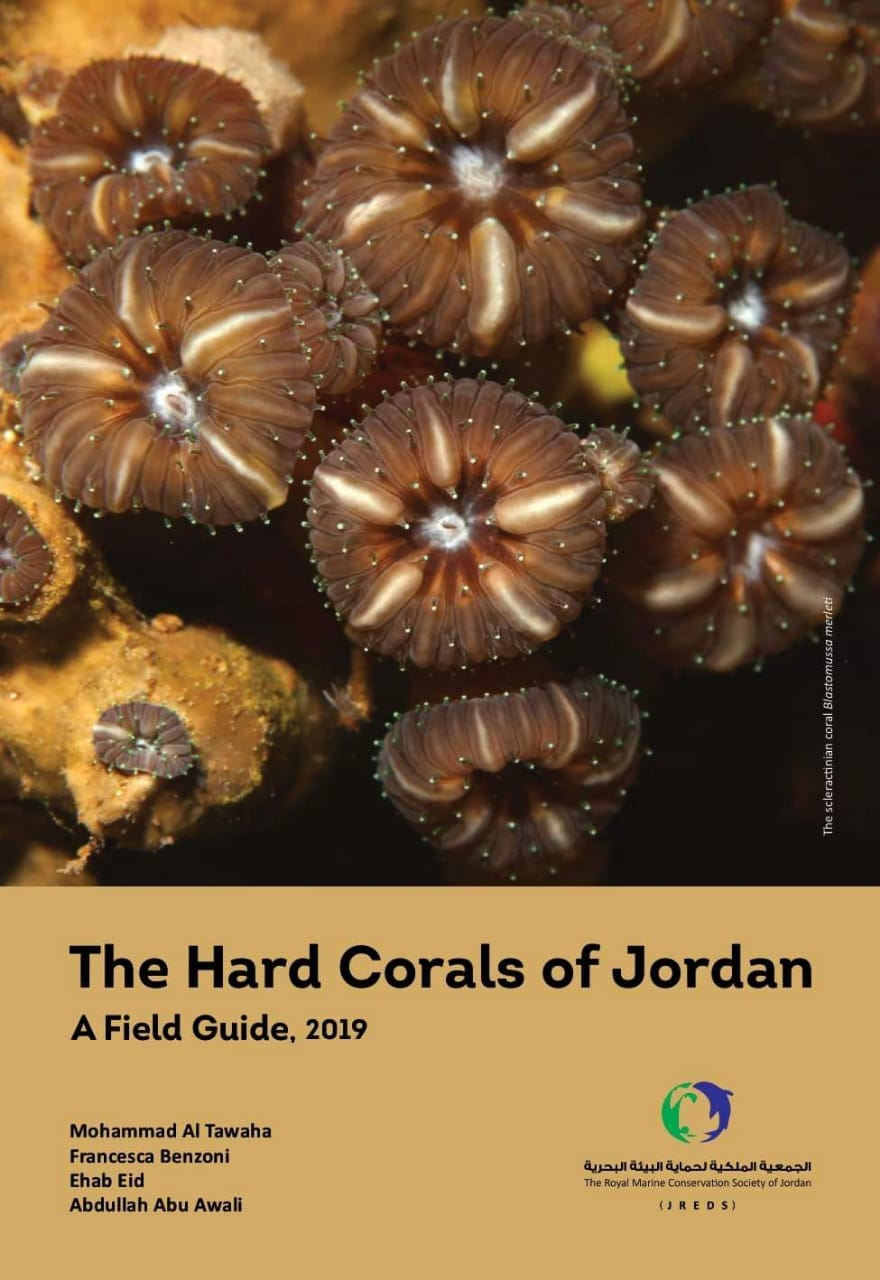 The field guide on Jordan’s hard corals was developed with the support of the Sustainable Use of Ecosystem Services project in Jordan. The project, commissioned by the German Federal Ministry for Economic Cooperation and Development (BMZ) and implemented by GIZ in cooperation with the Jordanian Ministry of Environment, included the component “Mainstreaming Marine Ecosystem Services into Development Planning” with the national partner organization JREDS (2017 -2019). JREDS is also part of the ESP National Network of Jordan and belonging to an active scientific expert community, striving for an enhanced awareness of the value of the rich biodiversity and ecosystem services among the civil society and decision-makers in Jordan.

The component focused on the need to develop a stronger link between policies for an enhancement of the people’s livelihood and policies focused on ecosystem management and conservation, while promoting the use of relevant findings from some key initiatives to build a framework for capacity development for decision- and policymakers, for an improved understanding of ecosystem services and their role in development planning. In addition, JREDS has collaborated with the University of Milano-Bicocca, Italy to establish the field survey, and co-financing was provided by the International Union for the Conservation of Nature (IUCN) to print copies of this guide book.

This remarkable guide will enrich the Jordanian`s knowledge of species and ecosystems in the Gulf of Aqaba, considering the so far very limited information available on marine ecosystems of the region, and Jordan in particular. In addition, it will certainly aid the country’s conservation efforts, and help in developing solid strategies and action plans for species and ecosystem conservation at the national and even international levels. This resource will also support Jordan in fulfilling its commitments towards the international community in terms of the United Nations Convention on Biological Diversity, and the Sustainable Development Goals (SDGs), especially SDG14 “Life Below Water”. The book makes specific reference to the multiple ecosystem services provided by the coral reefs and to their tremendous economic value not only for touristic purposes, but also from the ecological point of view and as a habitat for countless other species of the Red Sea.

The book can be obtained directly from The Royal Marine Conservation Society of Jordan (JREDS):

We use cookies to ensure that we give you the best experience on our website. If you continue to use this site we will assume that you are happy with it.OkRead more